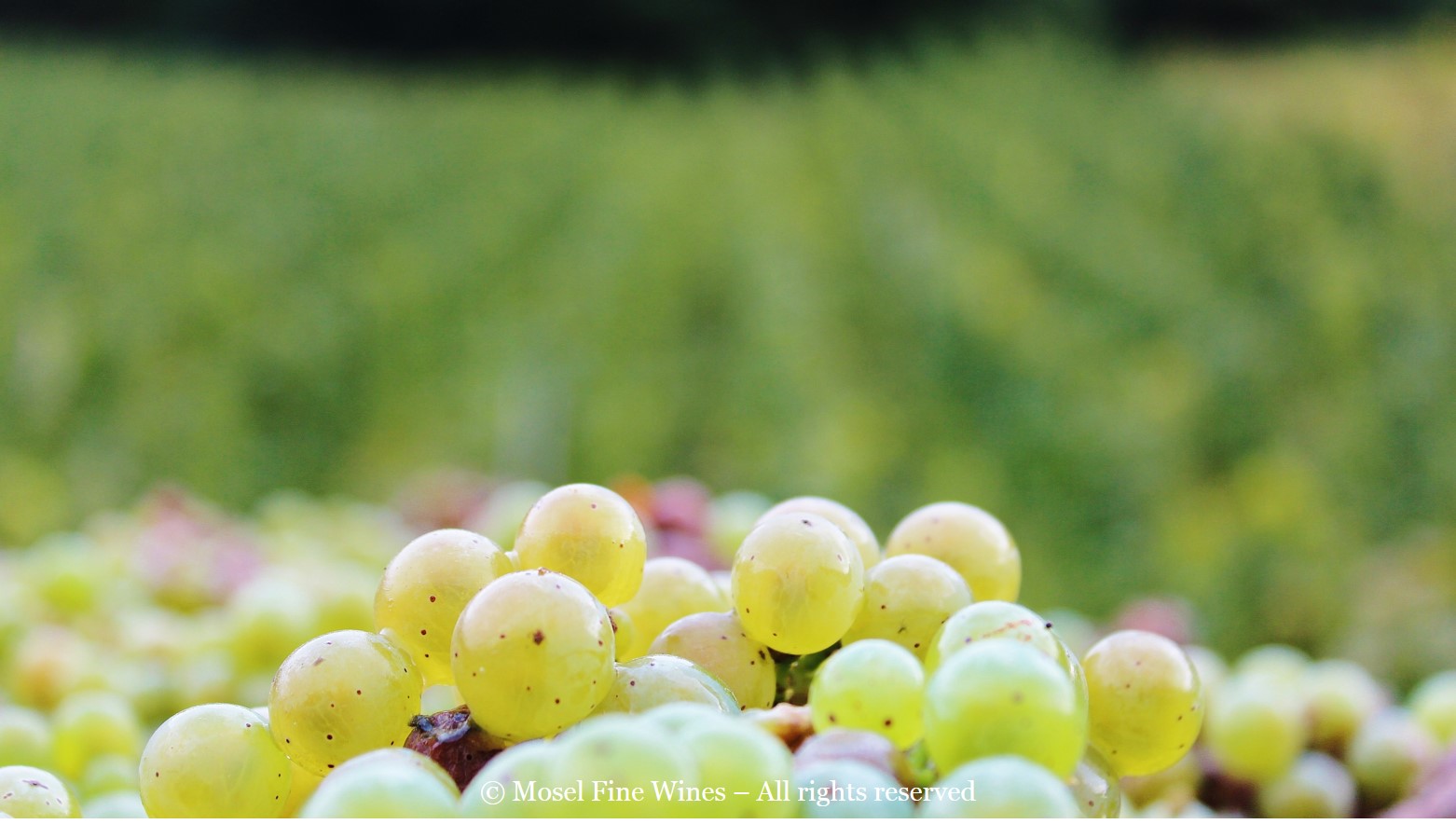 Mosel Vintage 2015 | The Harvest Comes to a Close!

Did the vintage turn out as well as anticipated early October? Here some views and early answers from the winemakers.

Winemakers were all fired up at the beginning of October, when the 2015 harvest started. Some rain in September had tested their nerves still raw from the nightmares of the 2014 harvest. But sunny and dry weather made a come-back at the end of the month and, after a clean-up of the vineyards, everything looked fine again as winemakers turned their attention to the main harvest (typically by October 5).

The week of October 5 proved loaded with sunshine thankfully paired with comparatively cool temperatures at night. This allowed winemakers to bring in, among others, some high level Auslese, BA or TBA from the fruit affected by botrytis following the rain in September. Overall, the good weather made everyone happy and the internet was literally swamped with pictures of beautiful grapes, happy harvesting teams and autumnal sunshine! 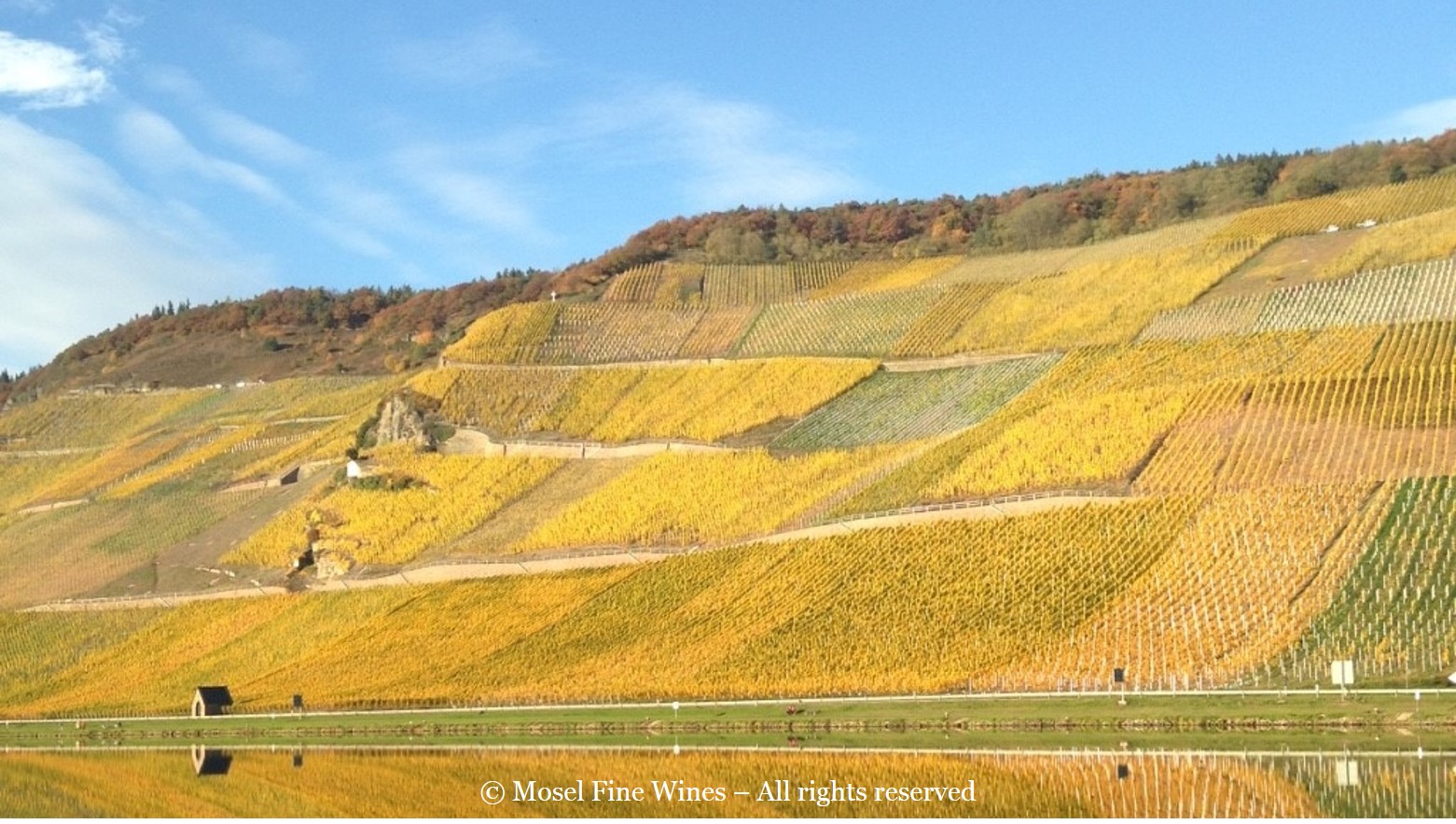 The weather then turned decisively cooler as of week two and stayed essentially cool and dry for the rest of the month. This proved ideal, as Carl von Schubert (Weingut von Schubert) explained: “The cool and dry weather meant that the grapes remained healthy and clean during the whole month, without ripening too fast. We were therefore able to make our selections without the stress of 2014, picking the right fruit for all our different wines at the right moment.”

Mosel Vintage 2015 | Good (without Over) Ripeness

The 2015 summer proved hot and dry and the prospect of a very ripe (2011 or 2003) vintage was a real possibility. The impact of the hot summer was still noticeable by early October: Despite a rather late flowering (at least by modern standards), sugar levels were already quite high. Reports of harvests of fruit at 90-95° Oechsle in the best vineyards were not uncommon, although this was partially the result of botrytis selections.

However (or should we say thankfully?), sugar levels did not really evolve much during October, a fact which remains still somewhat surprising as Andreas Barth (Weingut Lubentiushof and Weingut von Othegraven) noted: “The vines still kept their leaves right until the end. One would therefore expect the sugar content in the grapes to continue to increase. This turned out not to be really the case. Clearly, the cool weather slowed everything down, a fact I am very happy with: I was able to harvest perfect Spätlese-styled grapes for my dry-tasting wines at my Lubentiushof Estate and we could also harvest the ideal fruit for our beloved Kabinett wines at the von Othegraven Estate.”

So instead of another 2011 or 2003, the vintage yielded grapes with good but not very high sugar levels. As Angelina and Kilian Franzen (Weingut Reinhold Franzen) mentioned, “we were blessed with a great harvest period, the fruit was clean and ripe: We hardly harvested anything with less than 90° Oechsle in our vineyards in Bremm and Neef, which is ideal for our dry-tasting wines.” This feeling of “the right ripeness” was echoed by Daniel Vollenweider (Weingut Vollenweider): “The sugar levels remain reasonable, not exceeding 90-93° Oechsle in our Spätlese. This is pretty much ideal in my eyes!”

The variety in grape maturity allowed also for the production of lighter wines, even in top and potentially riper vineyards, as Constantin Richter (Weingut Max Ferd Richter) reported: “We were able to select fruit out of the privileged Wehlener Sonnenuhr with no more than 82° Oechsle, ideal for Kabinett.” Florian Lauer (Weingut Peter Lauer) goes along the same lines, reporting that the bulk of his harvest lies more at 85° Oechsle, i.e. at crisp Kabinett-Spätlese levels.

The acidity levels were still quite high at the end of September (around 12-13 g/l) but went down under the influence of the good weather of early October. However, the ensuing cooler weather meant that the acidity levels remained crisp, at 9-10 g/l, even by the end of the month. However, the quality of the acidity evolved dramatically as the grapes ripened during the month, as Christian Hermann (Weingut Dr. Hermann) explained: “The proportion of tartaric acidity decreased gradually over the month and, by the second half of October, the acidity was perfect for my style of Mosel wines. I am therefore very happy to have waiting until the end of the month before harvesting some of our best wines, including in the Erdener Herzlei and the Erdener Prälat.”

Overall, high acidity will be a characteristic of the vintage, as Egon Müller confirmed: “2015 is qualitatively and quantitatively an excellent vintage with little botrytis, high sugar levels and (very) high acidity levels. While not as high as in 2010, the acidity is nevertheless remarkable for a vintage without much botrytis and high ripeness.”

Most winemakers finished their harvest by October 25-28, with a few winemakers were still busy by early November. This included Stefan Steinmetz (Weingut Günther Steinmetz) and Johannes Fischer (Weingut Dr. Fischer), who took advantage of the stable weather conditions to give some of their fruit even more hanging time.

Mosel Vintage 2015 | Suited for All Styles of Wines … Even Eiswein?

One constant remark that we got from all winemakers is that the vintage allowed them to produce “everything”, which means in Mosel winemaker terms that there will be high-end dessert wines (a large number of Estates did go for BA/TBA!), fruity-styled wines including Kabinett but also dry and dry-tasting wines made from clean fruit. As one winemaker candidly admitted, “I would sign now for another 10 vintages like 2015 if I could.”

Quite some wine growers decided to leave some fruit out in a gamble for Eiswein. It remains to be seen if Mother Nature will play along and allow for really every single type of wines in this vintage!

Mosel Vintage 2015 | Solid Yields except Possibly in the Ruwer

Does this mean that everything is fine? In principle yes. The only mild complaint heard here and there concerned the yields, which proved on the lower side, in particular in the Ruwer.

One Estate that got hit by low yields is the Weingut von Kesselstatt, as its Estate Manager Wolfgang Mertes explains: “I am thrilled by the quality of the fruit that we brought in. But, again, yields are depressingly low. First, flowering in the Saar and Ruwer was not ideal, which already had an impact. But above all the very dry summer led to tiny berries with little fruit. This particularly impacted our vineyards in the Ruwer, where the soil is lighter and thinner. Overall, we did not exceed 35 hl/ha at our Estate.” Also Carl von Schubert (Weingut von Schubert) mentioned that the juice content of his grapes was comparatively low.

However, yields seem to closer to normal in the Middle Mosel and the Terrassenmosel. As Constantin Richter (Weingut Max Ferd Richter) mentioned, even the Brauneberger Juffer-Sonnenuhr, a vineyard prone to draught stress, did deliver reasonable yields.

Mosel Vintage 2015 | A Great Vintage in the Making?

At the beginning of October, we mentioned that, on paper, the sugar levels and acidity levels were most comparable with those of 2012 and 1994. As the harvest comes to a close, the best recent comparable seems to be more 2012 than 1994 given the ripeness of the fruit and the fact that botrytis did not really spread. However, Rudi Hermann, the senior boss at Weingut Dr. Hermann with over 40 vintages in his legs, sees also parallels with the 1975 vintage, which delivered good ripeness with high acidity (and possibly a little bit more botrytis).

Whichever way, everything winemakers have relayed (and also the fruit we have seen!) makes us expect a superb vintage 2015, with crunchy acidity and ripe fruit.

Up to the winemakers now to translate the great raw material into bottled Riesling art in the coming months: Fingers crossed!