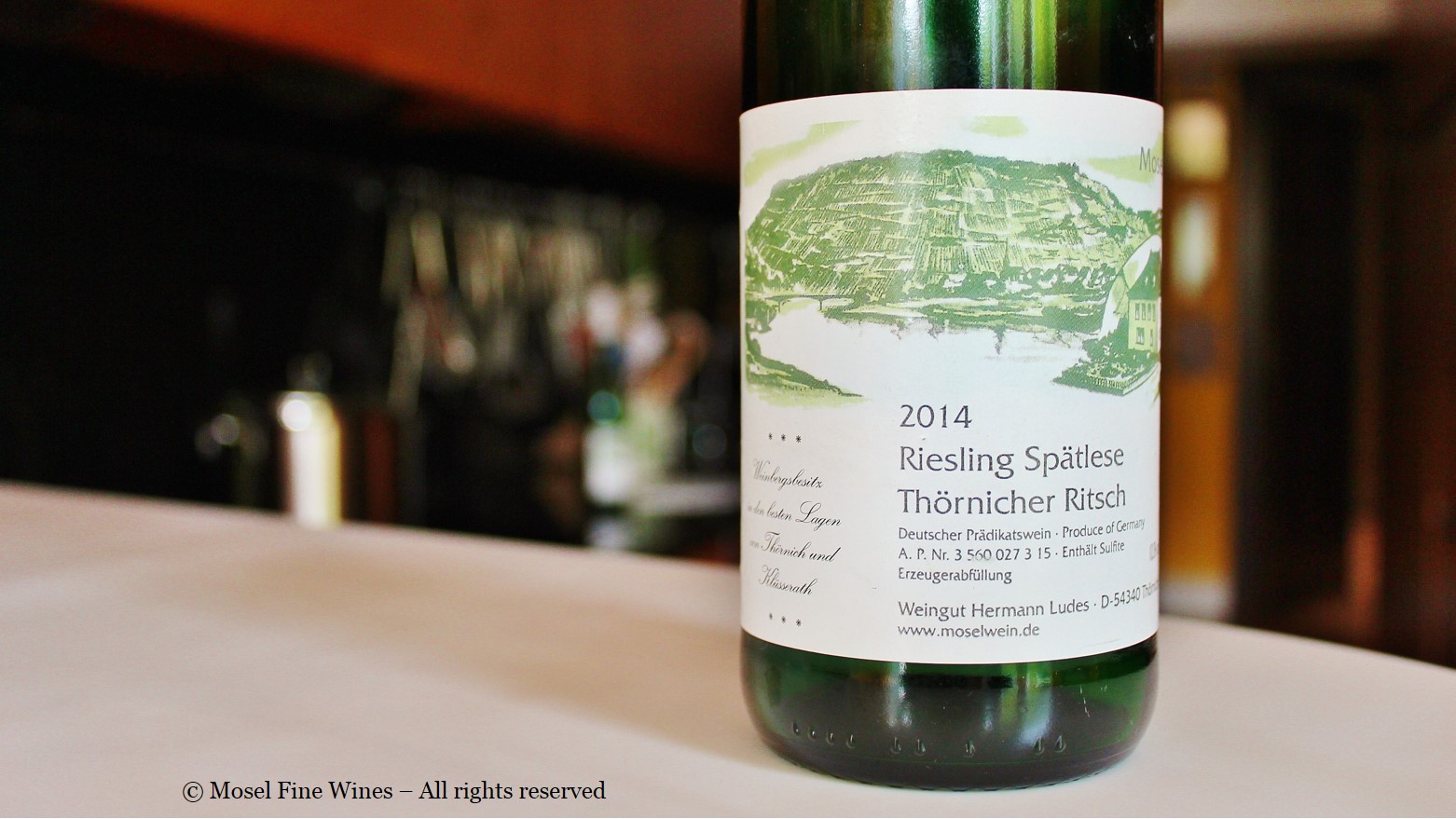 This little-known producer of gorgeously playful and elegant wines from the under-rated Ritsch crafted an outstanding Spätlese in 2014. Read the story.

The Mosel Vintage 2014 proved a remarkably contrasted vintage with true strokes of genius right next to the ordinary (to remain polite). Never have we experienced such a huge diversity in quality and style as in 2014.

Conscientious wine growers were able to produce quite some nice wines. However, we admit to have been surprised by the wines of the Weingut Hermann Ludes: Little did we expect such an “unknown” Estate (brought to our attention by one of our readers!) to produce such a gorgeously playful 2014er Thörnicher Ritsch Spätlese in this overall quite challenging vintage. This made us curious!

Weingut Hermann Ludes | A Little-Known Estate with a Prestigious History

The Weingut Hermann Ludes is probably completely unknown to most outside of the village of Thörnich. Yet, it can look back to quite a history: Until the 1970s, It was a member of the Naturwein-Versteigerungsgesellschaft Trier, one of the predecessor organization to the Bernkasteler Ring, selling its wines at high prices. As so many other Estates from less famed parts of the Mosel, it suffered from the downturn of the 1970s and 1980s and fell somewhat under the radar. The Estate’s pride remain its prized holdings in the under-rated Thörnicher Ritsch (more on this later), which Hermann Ludes painstakingly acquired over the years. These are all situated in the front steep south-facing part of the hill and a sizeable part is still planted with 80-90 year-old un-grafted vines.

Winemaking here is pretty much as it was when Hermann Ludes, now close to retirement, took over in the 1970s: Moderate but not low yields (around 70 hl/ha), fermentation with ambient yeasts, use of Prädikat for all style directions and fruity-styled wines with rather low levels of residual sugar, as it was common practice up to the 1990s. In one aspect though, Hermann Ludes did embrace modernity. After having encountered numerous cork problems, he has bottled his whole production with screw capsules since 2000.

What struck us immediately is the House style: The wines are driven by an intense playful lightness which we also find in the wines from Weingut Joh. Jos. Prüm in Wehlen or Weingut Johann Peter Reinert in Kanzem. The parallels with Joh. Jos. Prüm go further: Much like this prestigious Estate, the wines from Hermann Ludes exhibit strong notes of reduction (“stink”) from ambient yeast fermentation in their youth. These only gradually resolve with bottle aging (a 2008 did still show some signs) or extensive airing. However, a tasting of older wines has also shown how gracefully the wines from this Estate can age, gaining in precision and finesse on the way.

The Thörnicher Ritsch is probably less well known to many Mosel wine lovers as few internationally widely-distributed Estates are active on this hill (the only exception being maybe the Weingut Carl Loewen). 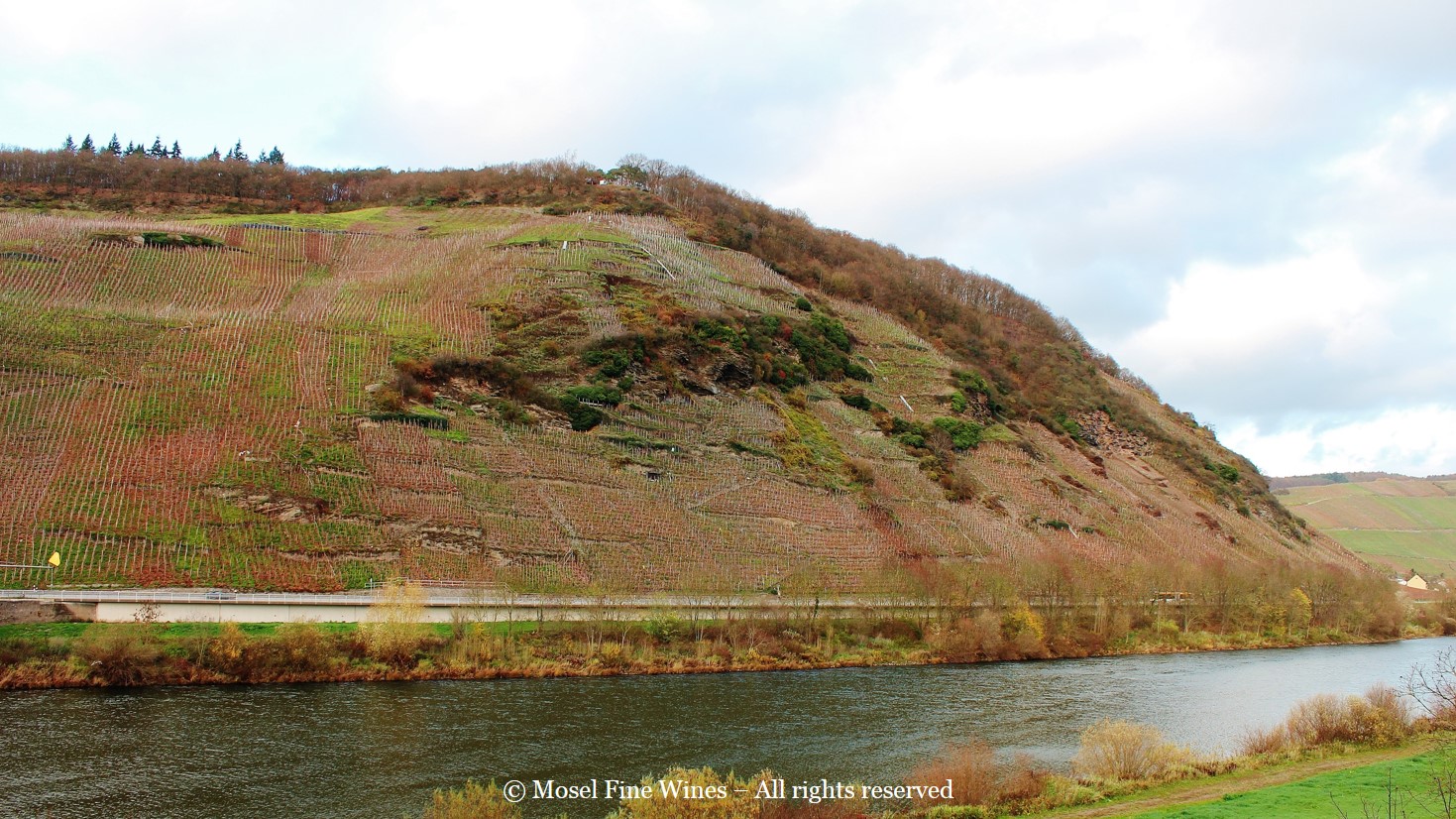 Yet, the vineyard has huge potential. Its scenery is dramatic: It stands out as a rock, with its front face facing due south. The vines grow on a slope so steep that parts of the hill is terraced. The signature is unique. The thin soil and weathered grey slate make for backward wines. Thörnicher Ritsch wines need time but, as older bottles have shown, develop great finesse with age and exhibit a rather unique touch of Limoncello which brings freshness and focus.

We do not believe that this vineyard will remain under the radar for long. Besides Carl Loewen, whose wine we have been regularly praising over the years, there is a whole new generation of winemakers led among others by Weingut Gebrüder Ludwig, Weingut K.J. Thul and Weingut Lorenz, who have taken over traditional family Estates and are pushing the boundaries of quality in this part of the Mosel (see Mosel Fine Wines Issue No 28 – Jun 2015 for some reviews).

Also at Weingut Hermann Ludes, a younger generation is set to step into the footsteps and carry on with the family heritage.

As we mentioned at the beginning, Hermann Ludes produced a surprisingly good collection of wines in the rather challenging 2014 vintage. This collection was crowned by an outstanding Spätlese from the Thörnicher Ritsch. As he explains: “This Spätlese should have been called Alte Reben because it comes from vines planted between 1920 and 1935. We harvested it at approx. 90° Oechsle immediately after the rain of early October, when the fruit was still very clean.”

This wine is a tribute to the elegant and playful style of this little-known Estate. Given the quality of its wines, it is unlikely to remain "little-known" for long!

A review of the remarkable 2014 Hermann Ludes wines can be found in Part II of the 2014 Vintage Report published in Issue No 29 (Oct 2015). This Issue is only available to subscribers. Not yet a subscriber? You can become one, free of charge, by simply registering yourself here below.

This offers a nice nose Limoncello, and wet stones. The wine is quite open on the palate, where the wine comes over as light yet packed with flavors. The finish is full of tension, smoke and well-integrated sweetness (the wine boasts 10% of alcohol). But it is above all the fragrant, quite floral and irresistible finesse which makes this wine so captivating as white flowers and fruity herbs linger in the after-taste. What a delicious wine with even quite some upside as it gains in grip and precision! 2019-2029

Overview of wines of the month >>>