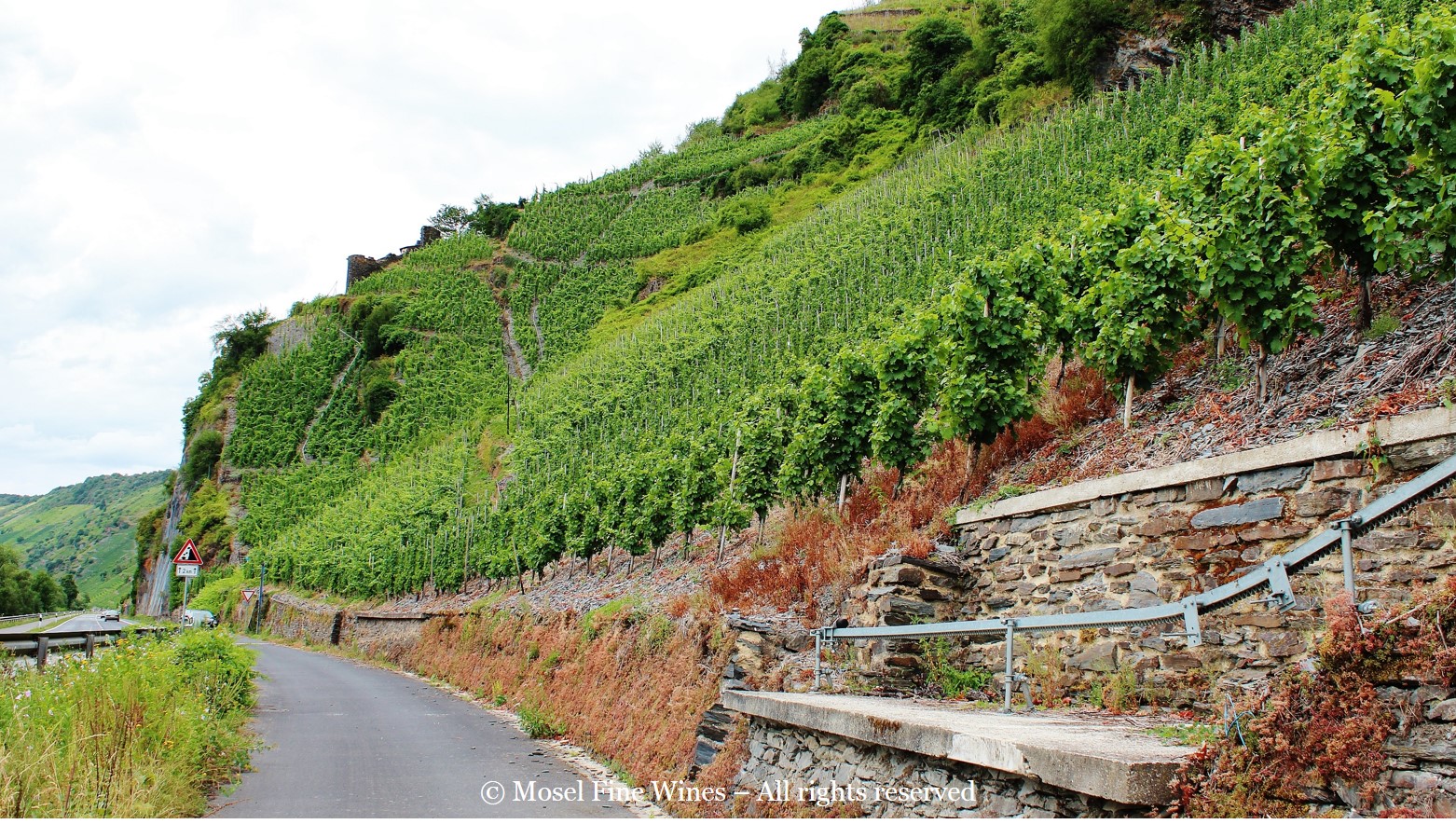 The Trabener Zollturm is yet another great under-the-radar vineyard to be given a new life: Immich-Batterieberg took over several parcels in this historic vineyard, including the one from the Klitzekleiner Ring as of 2016.

The vines in the Trabener Zollturm are planted on very steep slopes. As Gernot Kollmann from Weingut Immich-Batterieberg explains: “The soil is rather unique, and made from a very reflective almost oily hard grey-blue slate intertwined with some quartzite not often found in the Mosel.”

The history of the vineyard is rather complex and not fully understood. However, the modern-day (i.e. post 1971) Trabener Zollturm includes many highly prized spots, in particular Lausa, which had been classified in the highest categories on the taxation maps since the 19th century.

Although the quality of the parcels in the Zollturm were obviously highly regarded, they essentially lived a life in the shade of the large merchant houses from Traben-Trarbach. These used the grapes to pep up their branded wines instead of bottling them under vineyard names.

As the merchant houses went into decline, these steep hill parcels came at risk of being abandoned.

Such a situation would have happened in the late 2000s had the Klitzekleiner Ring not stepped in. The Klitzekleiner Ring is wine grower organization from around Traben-Trarbach which includes, among others, Weingut Vollenweider, Weingut Weiser-Künstler, Weingut Martin Müllen and Weingut "O.". The association has set it as one of its missions to rescue old-vine parcels at risk of being abandoned and to sell the produce under their “Bergrettung” label (a cheeky play of word as it means “Mountain Rescue” in German).

After successfully rescuing a parcel in the Enkircher Ellergrub (see here the 2008er Bergrettung Spätlese), the Klitzekleiner Ring took over 0.3 ha in the Trabener Zollturm in 2009 and spared no effort to revitalize the vineyard (including retraining the vines, stopping fertilizations, etc.). These Bergrettung wines regularly fared well in our annual Vintage Reports (the 2014er Bergrettung Riesling will be featured in the upcoming Issue No 29 to be released in October).

The Weingut Immich-Batterieberg is one of the great historic Estate in the Mosel, whose history goes back to the 15th century. After some turbulent times in the 2000s, it was finally given new life thanks, among others, to Gernot Kollmann who has been at its helm ever since. It produces highly regarded wines: In particular its Cru wines from the Enkircher Ellergrub, Zeppwingert and Batterieberg are regularly among the finest dry-tasting wines in the region (the spectacular 2009er Enkircher Ellergrub Riesling was a wine of the month).

Gernot Kollmann admits to always having had an eye for the Zollturm: “Besides the very specific terroir, I also noticed that the south-facing Lausa part of the vineyard is always where the snow melts first on the whole of the Starkenburg Hang. Of course, the Bergrettung wines underlined the potential of the vineyard very nicely.”

In spring 2015, the Estate took over the parcel in Lausa just below the tower from a retiring winemaker. As we learned a few weeks ago, as of 2016, Weingut Immich-Batterieberg will also take over the parcel tended by the Klitzekleiner Ring for its Bergrettung project (as well as another small parcel in the Rothwingert sector).

Trabener Zollturm | Another Great Example of Rescue of Mosel Vineyards

We are also particularly happy to see the efforts of the Bergrettung project by the Klitzekleiner Ring being rewarded as the parcel is now finally rescued!

Many prime vineyards are still at risk throughout the Mosel. It is therefore heartening that thanks to the combined efforts of the Klitzekleiner Ring and Weingut Immich-Batterieberg, vineyards such as the Trabener Zollturm are being rescued and given new and lasting life at the hands of leading winemakers!

NB: This is a shortened version of an article to be published in the upcoming Mosel Fine Wines Issue No 29 (Oct 2015).

Read about the Bergrettung project >>>