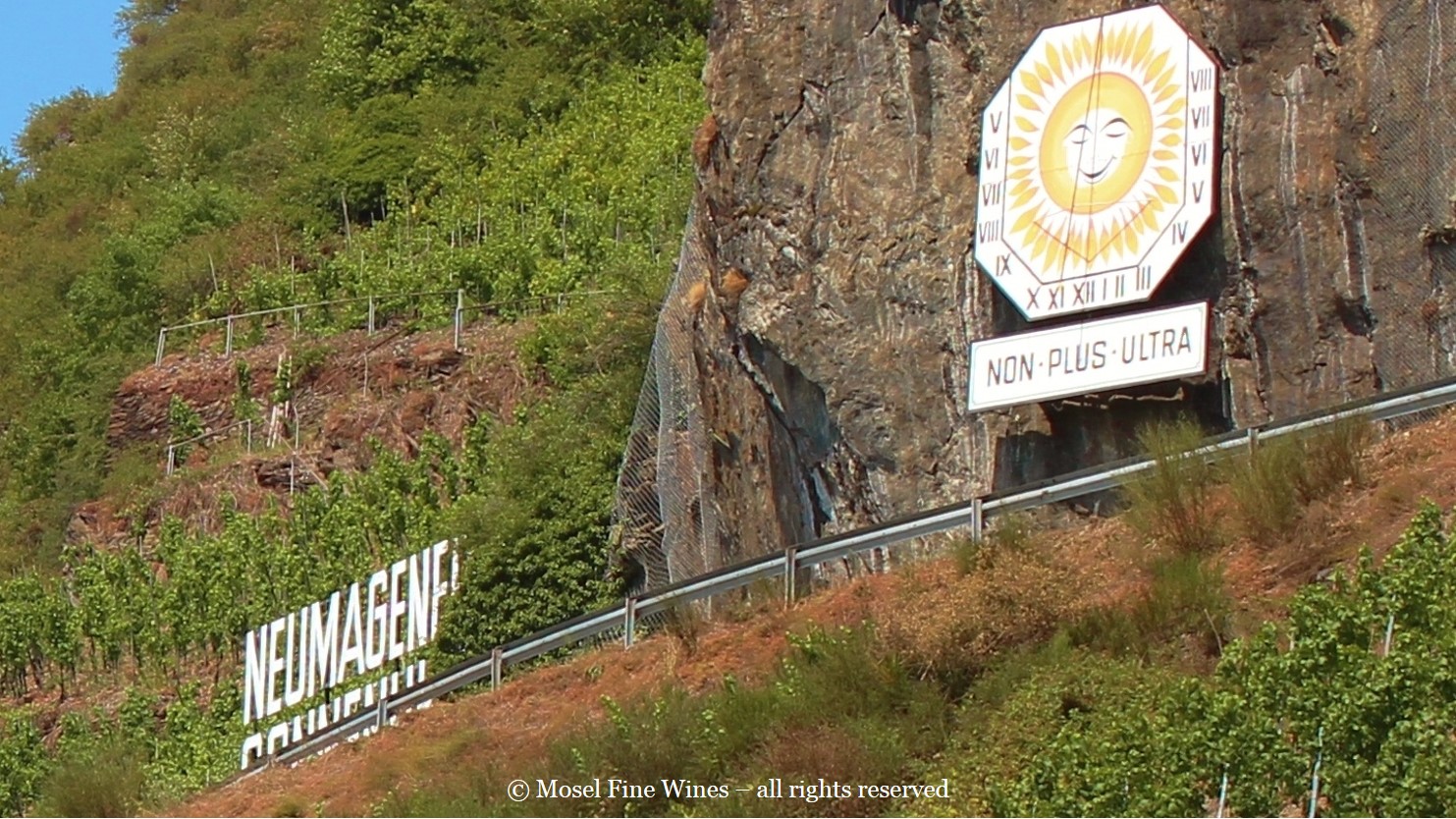 Vineyard Revival | Neumagener Sonnenuhr is Back!

The Neumagener Sonnenuhr was a firm fixture of Mosel Riesling until it disappeared from the radar by the 2000s. It is about to come back! Here is the story, which has a remarkable twist.

The Neumagener Sonnenuhr is a small 0.9 ha single vineyard situated in the heart of the steepest parts of the Neumagener hills, just downriver of the Trittenheimer Apotheke. It is completely enclosed by the Neumagener Rosengärtchen.

The Neumagener Sonnenuhr is exposed to the south-west and is on a very steep and comparatively stony soil with good drainage. The ancient name of this sector is Leienberg, which is the German for slate mountain: no need to explain why. 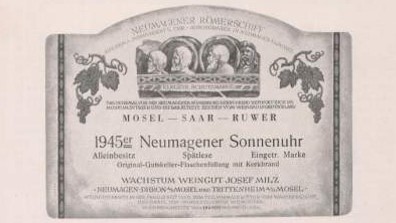 The history of the Neumagener Sonnenuhr is intrinsically related to that of Josef Milz. He was one of the grandees of the late 19th and early 20th century and one of the founding member of the Grosser Ring in 1909 (his descendants, Weingut Milz-Laurentiushof, have been a member since the 1950s). Josef Milz acquired some prime holdings in Neumagen around 1900, which he complemented by blasting away some rocks (needed for the construction of the railway track bed). He had the resulting vineyard, the Neumagener Sonnenuhr, protected by trademark in 1907. This vineyard was to remain in the hands of the Milz family until the 1970s.

The vineyard then passed on to two separate Estates. The lower part was taken over by to Günther Reh and the upper part by the Weingut Konstantinhöhe in Neumagen. However the rights to the name Neumagener Sonnenuhr (remember it is a trademark) ended up with the Reh family, so that the Weingut Konstantinhöhe never commercialized any Neumagener Sonnenuhr.

Günther Reh integrated his parcel into the Weingut von Kesselstatt which he took over in 1978. Now and then, the Weingut von Kesselstatt commercialized some Neumagener Sonnenuhr wines. However, the Estate included such an incredible array of vineyards (ranging from Scharzhofberger, over to Brauneberger Juffer-Sonnenuhr, right down to Doktor and Josephshöfer) that, more often than not, the fruit from the Neumagener Sonnenuhr ended up in regional bottlings.

Neumagener Sonnenuhr | A Come-Back Ahead! 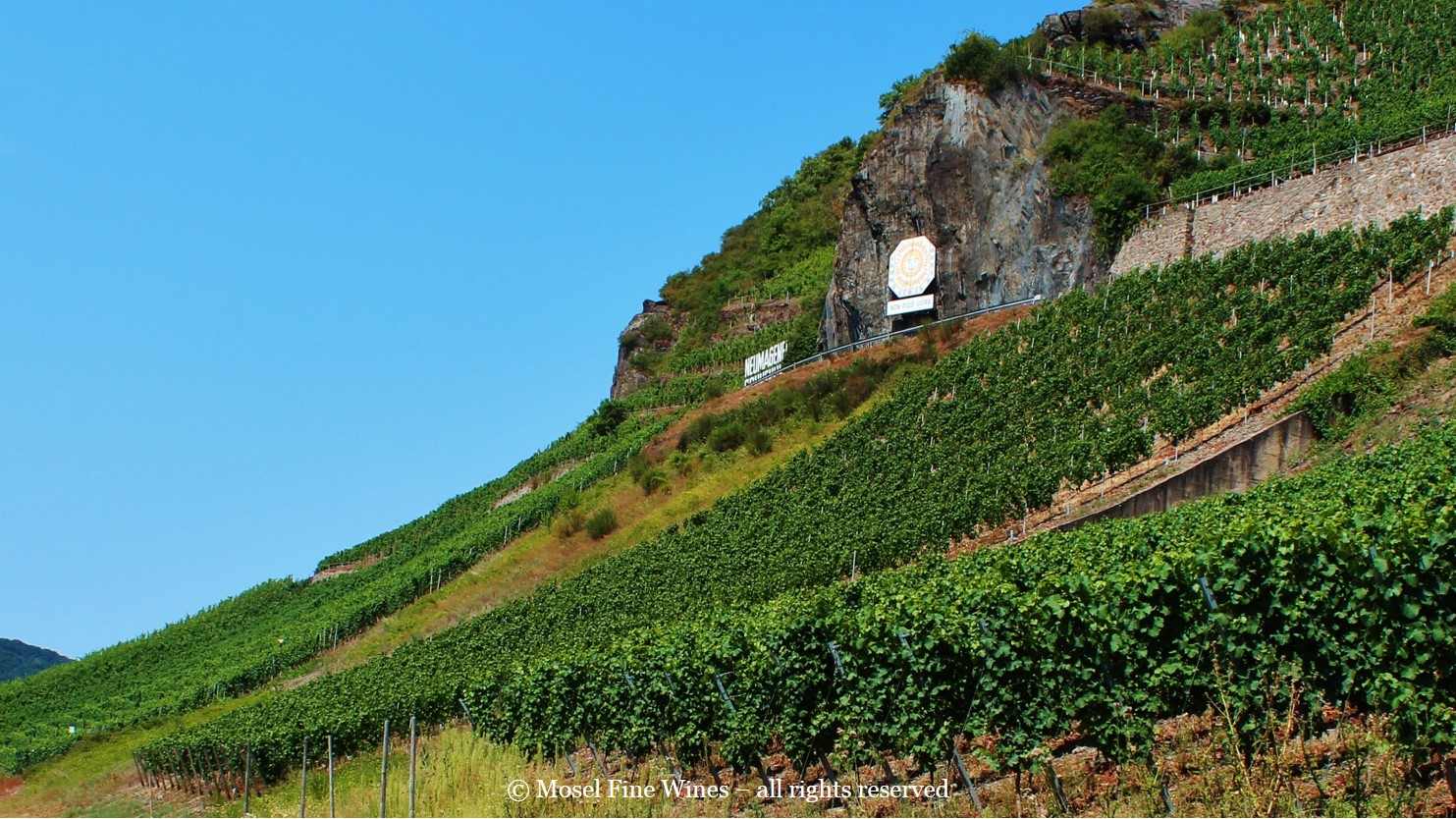 By the 2000s, the parcel was integrated into the Carl Reh operations (the parcel does not belong to Annegret Reh-Gartner or von Kesselstatt but to one of her siblings). Here also, the fruit from the parcel was “only” used in regional bottlings. The name Neumagener Sonnenuhr was slowly but surely on the way of getting forgotten. To make matters worse, one part of the vineyard was eventually rooted up.

Fortunately, things seem to take a turn for the better: In 2015, the Reh family leased out its parcel to the Weingut Blees-Ferber from Leiwen, a very good Estate which is still under the radar of the international press despite being capable of outstanding wines: As we reported in Mosel Fine Wines Issue No 26 (Oct 2014), we were impressed by its remarkable 2013 wines and highlighted a very successful Piesporter Gärtchen Auslese 2013 as wine of the month earlier this year.

Also, from what we understand, the Weingut Konstantinhöhe could now also legally label its wine from this vineyard as Neumagener Sonnenuhr, and we will see in the near future if it will do so.

It is heartening to see historic vineyards brought back on the map and we wish Stefan Blees at the Weingut Blees-Ferber all the success that this forgotten vineyard deserves!

A great Auslese by Blees-Ferber >>>

A gorgeous Auslese by von Kesselstatt >>>

An epic vineyard revival in the Saar >>>