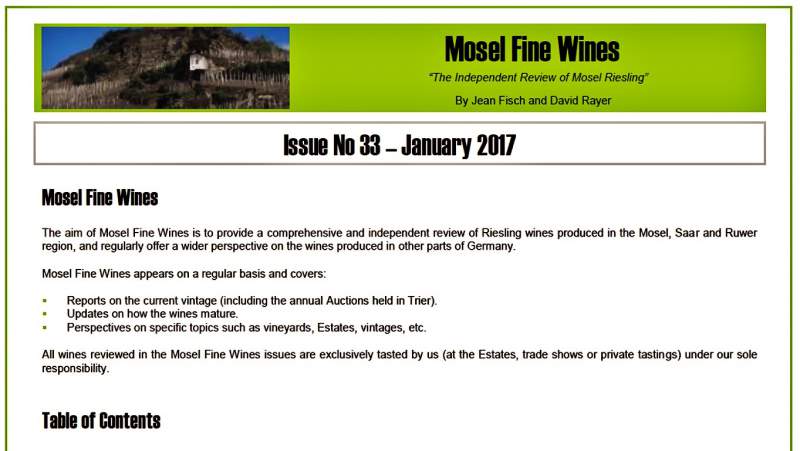 This Issue includes the 2015 Vintage Highlights, a sneak preview at 2016, stories of true Mosel heroes and grand Estates, and facts on German wine a century ago! Read about what's in store here below.

2015 is a true “land of plenty” which yielded great Mosel wines in all stylistic directions. However, as we mentioned early on, not everything that shines is gold.

After having tasted over 1,000 wines, many several times, we look back at the remarkable 2015 vintage with the full benefit of hindsight and put forward our list of not-to-be-missed “Vintage Highlights” for each stylistic direction, i.e. dry Riesling, off-dry Riesling, Kabinett, Spätlese and noble-sweet wines.

2016 Mosel Vintage | Victory from the Jaws of Defeat?

What does 2016 have in store? Although it is still early days, 2016 looks set on becoming a gorgeous vintage. But, we hear you asking, wait a minute: “Wasn’t the vintage affected by every single vine plague in the world?” Yes. “How can anything good come out of that?” We explain why.

Bert Selbach (Weingut Dr. Weins-Prüm) retired after the 2015 vintage. Earlier in 2016, he invited us to visit him in Wehlen and to look back together at 40 years at the service of Riesling while sharing some of his most iconic wines. This resulted in a fascinating interview over a career, Mosel wine then and today, and life in general.

Karl Erbes | A Precursor of the Flying Winemaker

Karl Erbes is the senior boss at the similarly named Estate in Ürzig. But what few people know is that he was also the head winemaker for no less than seven VDP Estates ... and this at the same time! Join us in meeting a de-facto precursor of the flying winemakers!

The Merkelbach brothers, celebrated their 65th vintage in 2016. No, not birthday, vintage! A celebration of these two true Mosel heroes is long overdue. Join us on what is essentially a walk down memory lane at this Estate where little has changed since the 1950s!

State Estates in Trier, Ockfen and Serrig | Historic Estates Given a New Life

By a remarkable coincidence, each of the three State Wine Estates in the Mosel is given a new life at the hands of different winemakers in 2016 ... including the Red Cross. This provides the ideal occasion for a closer look at these grand Prussian Estates and founding member of the VDP Mosel.

German Wine | A Look at a Century Ago

Detailed statistics by the Prussian State on winemaking in Germany around 1910 reveal quite some surprises and dispels some myths. Which region gained in size? Which region was the most expensive? We summarize here a few facts which are probably not widely known. Brace yourself for some surprises!.

This Issue No 33 is being sent out as we write these lines and all subscribers should have received their copy by tomorrow.

You are a subscriber and miss this Issue? Simply send us a request by email and we will be happy to send you a copy.

You are not yet a subscriber and wish to get this Issue? Subscribe free of charge by registering yourself here below and ask us for a copy of the Issue by email.